Today marks only TWO WEEKS until the publication of The Borgia Confessions! As promised, I have another playlist to share with you all today: the playlist for Maddalena Moretti, the second narrator of the novel. If Kamelot was kind of Cesare’s signature artist, then Halsey is Maddalena’s. Hope you enjoy!

Welcome to the fourth installment of my blog series that I’m calling Story and Song: Visual Art Edition. Each post will feature a modern/contemporary song from the playlist of The Most Beautiful Woman in Florence, and a piece of artwork that features in the novel. I’ll describe how both fit into the story with a minimum of spoilers!

In This Moment – “Dirty Pretty”

This song, as you’ll hear if you listen to it, is dark and heavy and gritty. The lyrics talk about a woman being objectified, and how she wants to rise above that. This song was a no-brainer on the playlist for Simonetta’s story. As those of you who have read The Most Beautiful Woman in Florence will know, at times Simonetta is flattered by the attention she gets because of her looks and enjoys it, and at other she finds it ridiculous and even threatening. I felt this was a realistic way for her to interact with her beauty and that kind of attention. This song goes with chapter 32, in which Marco tries to trade on his wife’s beauty in a way that she is not at all okay with, and she lets him know. She feels angry and ashamed and dirty, even though she herself didn’t do anything wrong, and upset at how people see her. So she stands up for herself. I always imagined her walking away from Marco at the end of her argument with some of the lyrics from this song in her head: “I won’t close my eyes/Like you want me to/I am wild and free/I am untameable/And more than you’ll ever see/More than just your dirty pretty”.

Adoration of the Magi – Botticelli

In the novel, Botticelli at one point mentions that he is working on this painting, a commission for the church of Santa Maria Novella in Florence, and in fact that is just where it was really painted for. In chapter 34, Simonetta goes to the church to see it, and recognizes some familiar figures. In what was a common practice at the time, Botticelli included his patrons in the painting: the man in the red cloak kneeling in the center is Piero de’ Medici, father of Lorenzo and Giuliano; the man in darker red at the far left edge is Giuliano de’ Medici, and the man in black to the right of Piero is Lorenzo de’ Medici. The Medici were particular fans of the Adoration of the Magi motif – the private chapel in their palazzo has a fresco of the same theme, painted by Benozzo Gozzoli – because they were the only rich men in the Bible who made it into heaven. A fitting choice for a family of fabulously wealthy and at times ruthless bankers.

And finally – as Simonetta recognizes in the novel when she goes to see the painting – the figure in yellow at the far right edge of the painting, looking back at the viewer, is a self-portrait of Sandro Botticelli himself. Artists often painted self-portraits into scenes like this, and in Renaissance art you can always tell which one is the artist because he will be looking directly out of the painting and at the viewer.

This painting hangs today in the Uffizi Gallery in Florence, and I saw it in person when I visited doing research for the novel. Of course, I made sure to say hi to Botticelli 🙂

Welcome to the third installment of my blog series that I’m calling Story and Song: Visual Art Edition. Each post will feature a modern/contemporary song from the playlist of The Most Beautiful Woman in Florence, and a piece of artwork that features in the novel. I’ll describe how both fit into the story with a minimum of spoilers!

This lovely song speaks of passion, art, and connection, so it was a natural choice for the playlist of The Most Beautiful Woman in Florence. For me, this song fit especially perfectly with the scenes in the book when Simonetta is posing for Botticelli’s first portrait of her – the one he paints shortly after her marriage to Marco. It’s a moody and beautiful song, so it seemed to go perfectly with those moments when Simonetta is first aware that her feelings for Sandro, as she calls him, are perhaps more than just friendly, though she doesn’t yet confront them or indeed know how to deal with them. 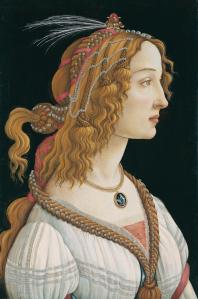 This portrait, widely believed to be of Simonetta Vespucci, was not in fact painted until after her death. However, in the novel I chose to have Botticelli paint the portrait sooner, and have it be the one that Simonetta poses for. I tried to describe it as best I could in the novel. I think it really is a beautiful painting, and I think that Simonetta would have liked it very much had she seen it. So in the novel I had her react in just that way to it, and she is proud that she could contribute to the making of such a piece of artwork.