Announcing My Fourth Book, IN THE SHADOW OF SAINTS!

I know I’ve been teasing book 4 quite a bit on social media, so I am SO THRILLED to finally be able to tell you ALL about it! My fourth novel, entitled In the Shadow of Saints, will be coming in Winter 2020 from St. Martin’s Griffin!

Of course, I was always going to write a book about the Borgias 🙂 They’ve been my favorite historical family since I first stumbled on a novel about them as a teenager. They’re often referred to as Italy’s first crime family, and while historically that isn’t really technically true, their story does indeed have all the things that such a moniker suggests: scandal, corruption, politics, shady dealings, wealth, sex, violence, power, murder. It’s rich ground for any storyteller, and I am certainly not the first nor the last to cover it.

My novel, though, does take a bit of a different perspective on the infamous Borgia family. It’s told in alternating points of view, by two different characters: one being Cesare Borgia, the eldest of Rodrigo Borgia’s children, and the second being Maddalena Moretti, a maid who works for the family and is a fictional character of my own invention. My agent has been calling this my “upstairs/downstairs” look at the Borgias, and it is very much that. However, there are several reasons I chose to tell this story from two points of view, and from the points of view of these two characters in particular.

Cesare Borgia (pronounced CHEH-sah-reh – “ce” in Italian is pronounced like “che” in English; think “cello”) is the member of the Borgia family who has always fascinated me the most – perhaps because he was the most brilliant, manipulative, and wicked of the bunch. Most of the novels about the Borgias that I’m aware of usually focus on Lucrezia, as the only sister and most unfairly maligned member of the family. I wanted to really dig into Cesare as a character because, after all, villains don’t tend to start out as villains – they become so over time. I’ve been thinking of Cesare’s portion of this book as his villain origin story, and it was both a lot of fun to write a baddie and at the same time could get rather dark. I definitely drew inspiration from Walter White of Breaking Bad fame when working out Cesare’s character arc: I wanted him to be someone readers would sympathize with and root for in the beginning, then have that sympathy slowly start to erode over the course of the story as his actions become increasingly more awful. It was a challenge that I set myself, and one I embraced eagerly. I’m very pleased with how his character turned out. You all will have to let me know whether I’ve succeeded in my aims!

I had always wanted to write from Cesare’s point of view, but Maddalena’s perspective came about in something of an interesting way. I had written a few chapters from Cesare’s point of view that I showed to my agent at various times – I had actually initially anticipated this being my second book, then my third book (obviously, that didn’t happen). Each time she saw it, she liked what I had so far, but felt like something was missing, and that this project wasn’t quite ready. I agreed with her but didn’t really know where else to go with it, so it continued to sit on the back burner.

Fast forward to the fall of 2016. I had just handed in The Spellbook of Katrina Van Tassel to my editor and was working on drafting something new. You may have seen me refer to me “sexy opera book” on social media; well, that’s what I was writing, and I was having a blast. It was a book that I was just having a lot of fun writing, and at that point I anticipated that it would be my fourth book, as it was going really well.

Then the 2016 U.S. presidential election happened, and suddenly a fun, sexy book didn’t seem like the thing I should be writing, or the thing I wanted to write just then. I wanted to dig into something darker, something about power and corruption. It seemed like the best way for me to explore all that was to return to the Borgias book. And suddenly I found the missing piece, which had actually been there all along. In college I’d written a short story from the point of view of a maid who becomes involved with Cesare Borgia, and this, I realized, needed to be my second POV in the novel. I needed an outside perspective on this infamous family, someone who was of a completely different socioeconomic class than they, someone who could get entangled with and dragged into their power struggle, so that we might see how an everyday person could be harmed and compromised by the actions of the powerful and also by their potential proximity to that power. It all felt like something important, exciting, relevant, challenging, and interesting to explore.

So I added Maddalena’s POV, and it really was what the book had needed all along. Of course, that didn’t make any of it easier to write. Maddalena is by far the main character who has given me the most difficulty to date: it took me a long time and many rounds of revisions to really get a handle on her voice, to really get to the heart of who she was. She slowly revealed herself to me bit by bit, and as a result she’s a character that I’m really proud of. I hope you all love her like I do.

This is by far the most ambitious book I’ve written to date – I blogged a bit about getting started with it in this post. There were lots of times it felt like it was going to eat me alive. There was so much history to balance, so many tangled politics to keep in mind, dates and timelines to keep straight, lots of plot threads and character arcs to flesh out and bring to completion. I made and wrote from an outline for the first time, which I blogged about in this post.

The title has been another struggle – it had several just on my end before I ever handed it in to my editor, and then she and I changed it a few more times. We had a big Google doc going of title ideas, and would throw them back and forth to each other, but it took us MONTHS to find one we both liked and felt fit well and that the marketing/sales folks at St. Martin’s would go for. I’ve never had this kind of problem with a title before – even if I didn’t have the final title right off the bat, I usually found it without too much trouble – and boy, was it a challenge. This is such a big, sprawling book that it felt difficult to find just one title that encompassed everything, and that fit with both Maddalena and Cesare’s very different characters. I really love In the Shadow of Saints, though – ironically it was a title I first thought of a while ago, but it took me a while to see that it was the best one. I think it’s fitting and contains different layers of meaning that will inform the story as one reads on.

As difficult as writing this book was at times, though, I really did love doing it. I got to write about political dealings (shady and otherwise), a fascinating and large cast of complex characters, war and negotiations, murder, the glory and filth of Renaissance Rome, and a lot of drama that actually happened. So much of that was fun because a lot of it was new for me (especially the politics – I’ve always wanted to write a book that was very “let us sit in this room and plot politics”, and I’ve done it!). And, of course, I got to write about my favorite historical family, and my favorite era of history. I just love writing about Renaissance Italy, and I can promise you that I’m not done doing so.

Because of the many challenges of this book, in some ways perhaps it’s the one I’m most proud of. It’s something different, and it’s definitely my darkest book so far. It’s taken a lot of revision and edits and smoothing over of rough edges, but it is finally the book I always wanted it to be, the book I always knew it could be. A lot of credit goes to my editor as well, for her amazing, spot-on notes and feedback, and always being there for me to bounce ideas off of as I revised. It’s been such an amazing feeling, to keep working at it and see it improve each day. I really believe it’s my best book so far. And I can’t wait for all of you to read it.

As soon as I have a release date, cover, etc., I will be sure to share it all here!

An Ode to Florence: The Medici Palace 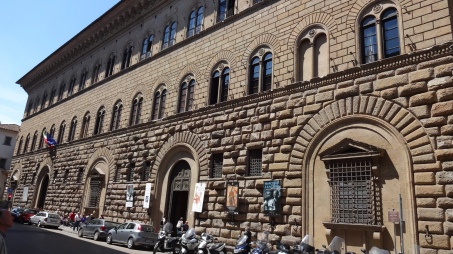 Properly known as the Palazzo Medici-Riccardi (after the family that built it and the family that owned it later and added to it, respectively) this is the palace where Simonetta attends parties and dinners given by the Medici family throughout the novel. It is where she first meets Lorenzo, Clarice, and of course, Sandro Botticelli, and is also where her marriage takes place.

The first Renaissance building in Florence, construction on the palace began in 1444 by Cosimo de’ Medici (Lorenzo the Magnificent’s grandfather) and was completed in 1460. It’s located just down the street from the Duomo on the Via Cavour, though at the time the street was called the Via Larga. The intention of the building was likely to convey power, wealth, and strength, and no doubt the facade communicates that message very well. 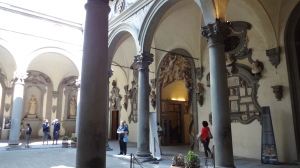 Above is the courtyard, where Donatello’s statue of David originally stood. It is one of the first things Simonetta sees in the novel upon entering, and it is her first glimpse of the beautiful artwork that the Medici family surround themselves with. Lorenzo’s office also originally stood off to the right of this courtyard.

This is the garden of the palace, just past the courtyard. This is where Donatello’s statue of Judith originally stood, which Simonetta also views in the novel. And this garden is the setting for the first dinner Simonetta attends at the palace, and where she meets the rest of the novel’s major players. 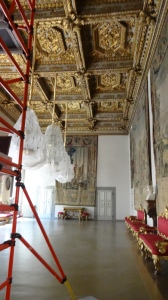 This room (which was undergoing some renovations while I was there) is from Lorenzo’s time (some of the rooms that are open to the public were added later). This is the room where I pictured the unveiling of Simonetta’s portrait taking place. 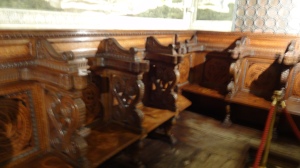 Above are some images of the (tiny) palace chapel, where Simonetta’s wedding service to Marco Vespucci takes place in the book. It’s a very small space on the second floor of the palace, but the frescoes are amazing.

I was initially a bit disappointed when I visited that many of the rooms from Lorenzo’s time weren’t open to the public (parts of the building are in use as a municipal building) but I was able to take what I saw and make it work for the novel. It’s a very cool building, and if you are ever in Florence I would encourage you not to miss it!