How about a new Authors & Inspirations post? I’m delighted to welcome Stephanie Storey to the blog today. Stephanie is an author of historical fiction, and her fabulous and vivid next novel, Raphael: Painter in Rome, will be out April 7th. I was lucky enough to read an early copy, and this beautiful book is one that has stayed with me since. Definitely pre-order yourself a copy for an escape into Renaissance Rome during these trying times! Read on to learn more about Stephanie’s own artistic inspirations.

What artist (of any medium) has had the biggest influence on you as a writer?

Michelangelo because of his obsessive determination to succeed, loner nature, and talent for expressing the struggles of humanity.

Do you listen to music while you write? Why or why not?

I almost always listen to music while I write. I choose songs that help me slip into the mood of the character. If I’m listening to a song that brings forth that same emotion in me, I can more easily can empathize with what my character is going through.

Are there any musicians who have had a big impact on your work?

REM/Michael Stipe and the Indigo Girls probably had the most formative impact on my writing: I admire the way they dive deep and straight at the heart. But also, I’m from the American South (Arkansas), so I also have to admit that country music has profoundly impacted my storytelling.

“Did you never call? I waited for your call
These rivers of suggestion are driving me away
The trees will bend, the cities wash away
The city on the river is a girl without a dream…”

–So. Central Rain by REM

What do I do now?

Could we start again please?

I think you’ve made your point now

You’ve even gone a bit too far to get your message home
Before it gets too frightening, we ought to call a halt
So could we start again please?”

–Could We Start Again Please from Jesus Christ Superstar

Your favorite band is going to write a song based on one of your books. What band is it, and what should the song be about?

Instead of a band, can I go with songwriter? Because I want to hear Lin Manuel Miranda writing a song about the moment in my new novel, Raphael, Painter in Rome, when the young Raphael stands in front of Michelangelo’s David for the first time, witnessing his rival’s brilliance and questioning whether he can ever find a way to beat it. I’d love to hear what Lin did with this moment of self-doubt mixed with determination to somehow win.

You are magically going to be granted the ability to be a virtuoso on one instrument. Which do you pick?

Saxophone. I love the yearning in the whine of a sax. It feels like a great expression of human longing. I desperately wanted to learn to play one when I was a kid, but never had the chance. Maybe that’s what I’ll do in my 40s!

What are your all-time favorite TV shows?

Survivor! It’s my favorite anthropological study of human interaction. I learn so much about how people manipulate others while watching that show (great research for a novelist!)

What TV shows are you loving lately?

I love a lot of them, but again, I’ll limit myself to one: This Is Us is my favorite show on TV right now. It makes me weep every single week.

Is there a TV show that’s had an impact on you as a writer?

Lots of them influenced me, but I’ll go with Little House on the Prairie because I used to watch and re-watch that show when I was a little kid (like 6, 7, 8). I was realizing that I wanted to write when I grew up, and I knew I wanted to tell stories that were as exciting and suspenseful and emotional as Little House on the Prairie (At the time, I thought it was the greatest storytelling in the world). I didn’t know this at the time, but now I know that I was breaking the stories down to study their components and figure out how they worked together to drive narrative forward. Yes, I was a nerdy kid.

Is there a movie that’s had a big impact on you as a writer?

Which of your books do you think would make a great movie? Is there a book of yours you WOULDN’T want to see as a movie, and why?

Oil and Marble is in development as a feature film right now by Pioneer Pictures, and I’m very excited about it because I originally conceived of the story as a screenplay/movie, so it feels like it’s all coming full circle!

Are you a theatregoer? If so, what was the last play/musical you saw?

Musicals are actually my favorite kind of storytelling. The most recent show I saw was Jagged Little Pill on Broadway. I expected it to be yet another jukebox musical (this one of Alanis Morrissette’s music), but it was so much more than that. It’s a moving, important, contemporary story that everyone should see. My other favorite that I’ve seen recently is Six the Musical about the six wives of King Henry VIII. It’s a musical in which his six wives have a sing-off, competing over whose marriage was worse. It’s funny and sweet and inspirational!

Are there any visual artists you’re a big fan of?

I could write a whole book about just this one question! I’ll narrow it down to my absolute, all-time favorite top five:

Everett Shinn (American, Ashcan School, for those of you who don’t know)

… Can’t believe I made myself narrow it down to five!

Do you ever draw on visual art in your work?

All the time, every day, every hour. I hope to be writing art historical fiction until the day I die, just like Michelangelo was still carving marble the week before he died when he was almost 89 years old. Oh to be able to do what you love until you die.

Has a place you’ve traveled ever inspired you in your writing?

The first place that truly inspired me was Italy. I studied art and Italian at the University of Pisa when I was twenty-years old, and I’m fairly certain that semester abroad altered the course of my life, since it was the first time I saw the David and the Sistine Ceiling in person. Paris also holds a particular creative power over me. Honestly though, almost every place I’ve ever traveled inspires me in some way!

What authors have most inspired you in your own work?

Jane Austen and Margaret Atwood are my all-time favorites, but my work is equally as inspired by Ken Follett, Dan Brown, and Philippa Gregory.

What was the last book you read?

I’m finishing up the Borgia Confessions by YOU, and I’m really loving it. It’s shocking that you made me empathize with Cesare Borgia, of all people, and that new perspective was just fun. Last week, I finished Christopher Bollen’s A Beautiful Crime, a gorgeous crime novel set in Venice. Next up, Therese Anne Fowler’s A Good Neighborhood.

Goldfinch is the most recent book that I’ve read that I just positively fell in love with—like instant classic for me. It ranks up there with my all-time favs like Pride and Prejudice and anything by Margaret Atwood

What’s a book you’ve loved that you feel more people should be talking about?

Consider the Feast by Carmit Delman is strange and fascinating and rich… I’ll admit a bias: Carmit and I got our MFAs in Creative Writing together at Emerson College, but I was genuinely floored by her newest novel, and it has stuck with me long after I read it.

What are your very favorite kinds of scenes to write?

Anytime an artist is having a creative breakthrough, Michelangelo finding David in the stone; Leonardo finding Lisa’s smile; Raphael sparking genius on the walls of the pope’s private quarters…

What artistic/creative talents do you have outside of writing?

I was a singer for a very long time when I was young. I’ve also spent serious stints as both a painter and an actor. I love exploring new creative fields, if nothing else to understand—more clearly—what it feels like to create different kinds of art.

If you could have a drink/cup of coffee/beverage of choice with any three people alive in the world right now, who would you pick?

My husband, Mike Gandolfi, and two of my best friends from college Michelle D’Antuono Wilburn and Sarah Potter (and I’d bring along Michelle’s husband and Sarah’s wife if I could expand the dinner party, too!) I’ve produced talk television for nearly 20 years, so I’ve met everyone famous I could ever want to meet, and let me tell you, they never live up to expectations. Plus, awkward conversations with famous people are not nearly as much fun as great conversations with great friends; and I appreciate those moment even more now during this pandemic, when we can’t get together with the people we love the most.

Let us know what’s coming up next for you: new books, new projects; what are you working on?

My new book, Raphael, Painter in Rome, comes out on April 7th so I’m out promoting that (moving book tour out of physical venues and online!) I’ve already finished the first draft of my next novel, but I’m not talking about it yet, except to say that it’s still art historical fiction and that I’ll be leaving the Italian Renaissance for now. I’m not done with the Italian Renaissance yet, but I want a moment away from it, so I can return with a fresh perspective. The next novel will also cover an area of art with which I have been obsessed for a very long time… 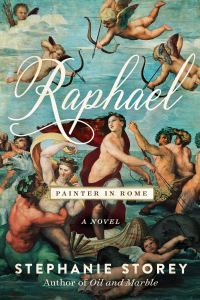 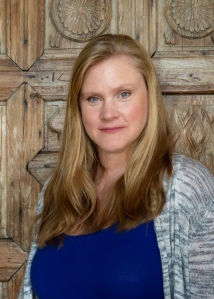 Stephanie Storey is the author of the stunning debut, Oil and Marble: A Novel of Leonardo and Michelangelo. It has been translated into six languages and is in development as a feature film by Pioneer Pictures. Storey is also a TV producer of The Alec Baldwin Show on ABC, The Arsenio Hall Show for CBS, and the Emmy-nominated The Writers’ Room on Sundance. When not writing fiction or producing television, she can usually be found traveling the world with her husband—an actor and Emmy-winning comedy writer—in search of her next story.

View all posts by Alyssa Palombo