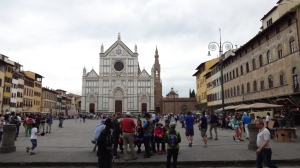 Piazza Santa Croce is named after the Basilica di Santa Croce, which towers over the square at one end, as seen above. The Franciscan church is perhaps best known as the burial place of Michelangelo, Galileo, Machiavelli, and Rossini, among others. Today the square is also home to shops, stalls selling souvenirs and leather goods, and restaurants and cafes. 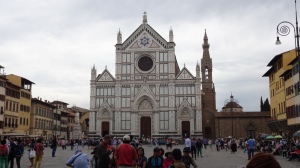 In The Most Beautiful Woman in Florence, the square is the site of a joust arranged by the Medici family in which Giuliano de’ Medici (to no one’s surprise) wins the day. At the joust, Giuliano carries a banner depicting Simonetta Vespucci as Athena, painted by Botticelli. He asked for her favor and named her the “Queen of Beauty” at the tournament. This event, which appears in chapters 30 and 31 of the novel, actually took place and is a matter of historical record. The historical record does not tell us, however, how Simonetta reacted to being so honored, so you’ll have to read the novel (if you haven’t already) to see how I imagined her reaction 🙂

When you visit the square today (or just look at these pictures) you’ll have to imagine it with banners and pennants festooning the buildings, stands erected on either side, and the lists in the middle. The joust that day was apparently quite the spectacle!