In my An Ode to Venice series, I’ll be posting pictures and information about my favorite places in Venice, including those that figure into The Violinist of Venice.

For my fourth An Ode to Venice post, I’ll be talking about one of Venice’s many landmarks, the Basilica di Santa Maria della Salute.

I mentioned the Salute in my post about the Grand Canal and the Accademia Bridge – it is the massive, domed church that sits at the entrance to the Grand Canal. For as large and imposing as its Baroque exterior is, though, inside it is surprisingly small and simple. 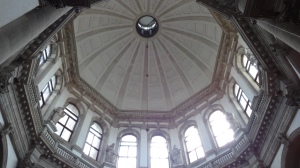 The church’s name translates to St. Mary of Health, and was built in thanksgiving for the majority of Venice’s population being spared from a bout of plague in the 1630s. It was designed by the architect Baldassare Longhena, and was completed in 1687.

In The Violinist of Venice, Adriana comes here to pray and clear her head after something upsetting happens (I won’t give anything more away than that). It is a place of solace for her, as before her mother died she would bring Adriana to the basilica to pray. She is accompanied by Giuseppe, her servant and friend, and they have a conversation and brief argument.

This same scene originally took place in Piazza San Marco, where Adriana and Giuseppe take a turn about the square, and but I had to change the location upon learning about Venice’s tides and acqua alta, and realizing that at that time of the day in December (which is when that scene takes place) Piazza San Marco would be completely flooded. So I moved the scene into Santa Maria della Salute, which I had visited while in Venice and thought was so beautiful that I had to work it into the book somewhere. It was also fitting that Adriana would want to pray and reflect at that point in the story, so it was the perfect location.

2 thoughts on “An Ode to Venice: Santa Maria della Salute”